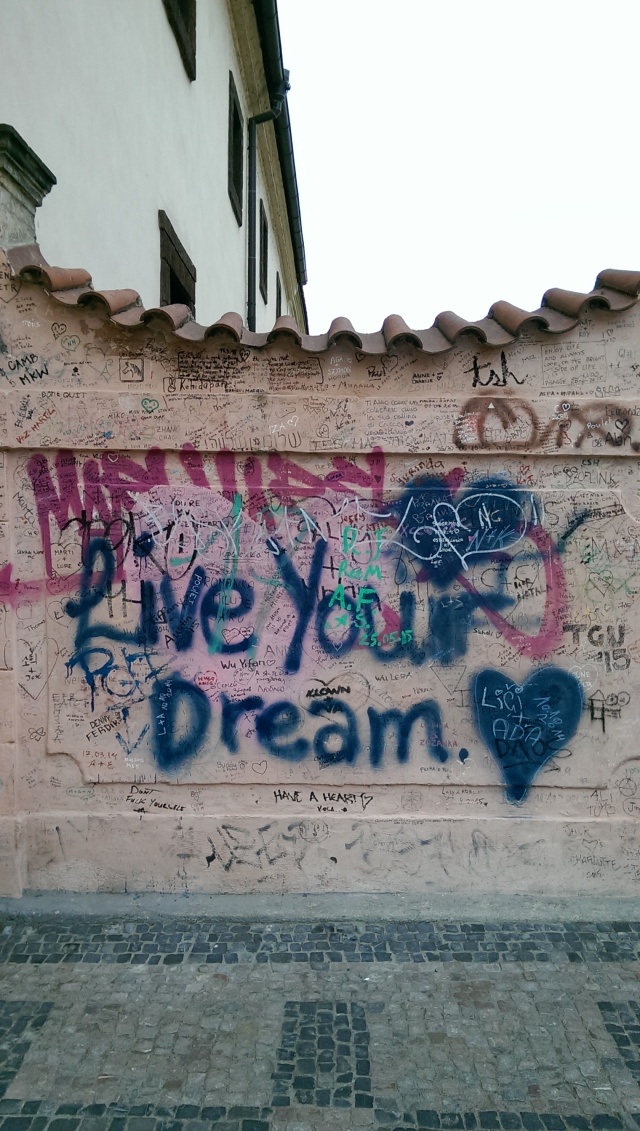 I have officially left Prague and am now in the South Bohemian region of the Czech Republic. So I thought it would be nice to reflect what I had learnt in Prague and the feels that I got whilst there. I’m not the one to be giving a history lesson but if you don’t know the history I can give you a brief run down. Formally known as Czechoslovakia, it was one of the most strongest European countries economically up until World War II where it was taken over by Nazi Germany. Hundreds of thousands of Czechoslovakian citizens and their jewish populations were sent to concentration camps, interrogated in prisons and/or were forced labourers. It wasn’t until 1945 before Soviet and American armies arrived to liberate the country from German rule and is now known as the Spring Uprising. The country was then a communist state up until 1989 when the Velvet Revolution occurred, where the country became a democracy peacefully in that year. History lesson over.

The 2 images above are of the John Lesson Wall, which is located in Lesser Town just off the Charles bridge. This wall was like your average everyday other wall until 1988 when the youngsters decided that they weren’t happy with the communist country and how it was being run. Apparently, authorities had tried cleaning the wall only to have it become graffiti-ed over again and again with world loving messages. Today, it is a vibrant addition to the city and is changing everyday judging from the people drawing with pen on the wall. I felt tears welling up in my eyes as I stood there looking at the wall. This is the sign of unhappy citizens in a country who wanted to be heard and change their country for the better (I hope). A country that had gone through so much from being one of the strongest countries in Europe to one whose Government was exiled during World War II. It gives me hope! So much so, it was making me teary.

This is a picture of the Zizkov TV Tower aka one of the world’s ugliest towers, which was built by the Nazi German’s to block radio signals from the east. I stayed close to this tower so got to see it lit up at night (Czech flag colours). War bunkers and communist-styled buildings dot this city. Adding something to the Gothic, baroque and cubic architecture. To me, it’s a blend of their history into the modern day Czech Republic and a reminder of their past so evidently everywhere. It makes me want to play a lament to the country and I hope they see additional good years to come.

One thought on “Reflections of Prague”

Follow Lingo in Transit on WordPress.com
Join 1,008 other subscribers