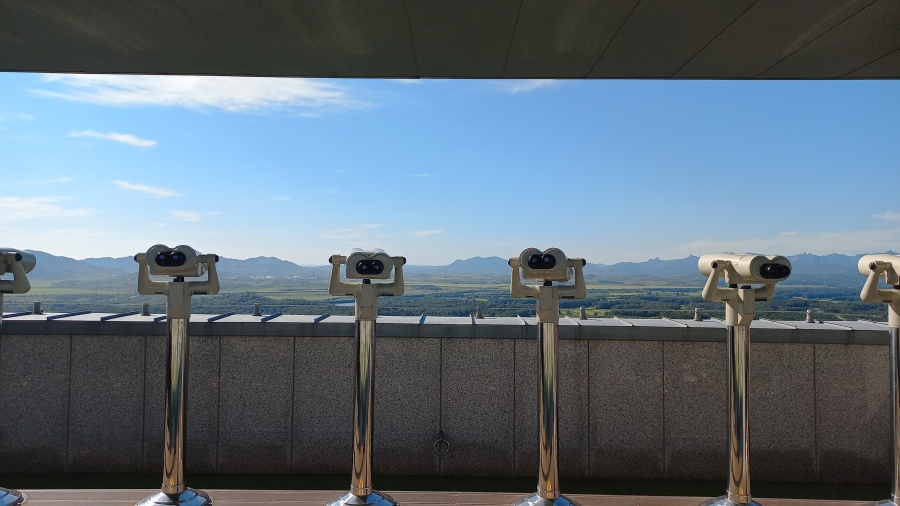 Visiting the most heavily guarded border in the world is possible from Seoul. The Demilitarised Zone (DMZ) tours offer visitors a chance to go into the zone to see what the area is like on dedicated tourist buses in an area of the Korean peninsula that has existed since 1945. Visitors can only visit with a ticket purchased at Imjingak Park (if you’re on a tour from Seoul, your guide will purchase the tickets for you).

Your tour will take you to Imjingak Park northwest of Seoul in the province of Paju. This park is somewhat of a local and international tourist spot with big grounds and parks offering a venue for outdoor concerts and even has a camping group next to it. Here, facilities have been built including a complex with food outlets, rooftop observatory and even an amusement park.

There are specific buses heading into the zone which you can only board from here. Buses depart every hour from infront of building (containing food and the DMZ ticket booth). The last bus departs at around 3pm so many of the DMZ tours running from Seoul start fairly early.

Within Imjingak Park, of particular interest are these two Comfort Women Statues. These are memorial statues dedicated to the women who were enslaved as comfort women during the Japanese occupation. One statue was destined for N. Korea but has not yet had the chance to get there due the political situation of the two countries. It remains here in the hopes that one day, this statue is able to cross over the border so that the women can be remembered there too.

A bullet ridden locomotive train is also on display which is a remnant of the Korean War. The train once carried supplies along the region when South Korea and the US had pushed back to gain terriority well into the current day N.Korea. On return once, US soldiers took to shooting at the train to prevent it from working and falling into enemy hands. It lay in the DMZ abandoned until 2006 when it was moved to Imjingak Park.

On this particular day, we were first taken to Odusan Unification Tower which contains a museum, cafe and observatory deck. It was quite empty when we were there. The binoculars are free to use where you can have a look at the other side of the river. There were what appeared to be some farmers about and farmlands.

I can see how they’ve really turned this part of the country into a tourist site. It was interesting to be able to have a look to the other side and see some residents go about their business. I wonder if those on the northern side know and even care. If anything, it came with a good view of the Korean peninsula landscape whichever direction you looked.

It was finally time to enter the DMZ. At the checkpoint, soldiers board the DMZ bus to check ID. Earlier that morning we had a list circulating on our initial bus so that we could write our names down. The soldiers had this list and were checking people off.

Inside the DMZ, people actually do live there. As you can imagine, it’s not an attractive place to live so as a way to attract more residents, those who live within don’t need to pay taxes and we were told residents were mostly make up of farmers and retired soldiers. That being said, those who live here have a separate ID and have to show it going in or coming out at the checkpoint. There is also a curfew.

It goes without being said that pictures were not allowed of any military areas. Once inside, there was of course no traffic. There were few buildings scattered and farm lands. A lot of the vegetation areas are fenced off as there are still many land mines that have not been disarmed.

Our first stop was the Dora Observatory. Another observatory deck. In this area across the border, I think they know it is a spectacle area. Both sides have their flags up and this was once a competition on who could have the highest flag. For the record, the northern side does.

Here you can see the Kaesong Industrial Area on the other side which was once functional when relations between the two sides were better. It was a manufacturing site with a functioning train line across the border but is not longer functional due to the current situation. There is a checkpoint that you pass inside which the tours will point out. It is barricaded at the moment as this highway still connects the two sides today.

You can see the fake propaganda town as well as real apartment buildings on the other side.

Our last stop was the 3rd Infiltration Tunnel which is open to tourists. This tunnel was discovered in 1978 and is 72m underground. There are no bags or cameras allowed and there are lockers to store your belongings. You are given a hard hat and then you start descending down a long ramp. If you have bad knees, you might want to reconsider! It’s not as claustrophobic as I had imagined down there although cool and also wet. At the very end, you are able to look through some glass to the other side before returning the way you came.

We also watched a short film about the area and the hopes of reunification one day. Attached to the tunnel entrance is a souvenir store for all your DMZ marked t-shirts, magnets, snacks and other knick knacks.

All in all, it was an interesting day in an interesting part of the world. It saddened me that separated families have been unable to see and even communicate with one another or were able to see each other but only once. For many it has been said that they would see each other in the next life. Tensions are still quite high and there have been many incidents in this zone that you can read about elsewhere online. At the time of writing, due to the pandemic, the DMZ trains and Joint Security Area are currently not open to the public.

Have you visited? What did you think? Would you like to visit one day?

21 thoughts on “DMZ From Seoul: Visiting The Most Heavily Guarded Border In The World”

Follow Lingo in Transit on WordPress.com
Join 1,014 other subscribers

Unauthorized use and/or duplication of this material without express and written permission from this site’s author and/or owner is strictly prohibited. Excerpts and links may be used, provided that full and clear credit is given to Lingo In Transit with appropriate and specific direction to the original content.
Disclaimer This blog contains opinions of my own and does not reflect the views or opinions of any company mentioned. This blog also cannot guarantee that you will have a great travel experience in any of these countries or on any of the tours that are mentioned. This blog is not responsible for the failures or actions created by third parties.
Loading Comments...